Sometimes a goal sneaks up on you almost unawares, until you find yourself focused on getting something you hadn’t ever thought about before. That’s what happened to me with my SSEA rating, and why I ended up in Bournemouth last week, doing stalls at 3000 feet above the Solent in weather I would not normally have taken off in.

The Piper Colt, a two-tone green and red PA22 came into our lives almost by accident. We simply happened to be at the pub when a syndicate was forming, and it was too good an offer to pass by. I didn’t much like flying in it the first time I went up, finding the visibility so much more restricted than in the Skyranger I had become used to flying. It didn’t take too long though, before I wanted to have a go, and having done that, realised I would have to get an SSEA conversion (Simple Single Engine Aircraft, or GA to most people) to my NPPL.

When my former instructor suggested doing an intensive three-day course – ‘Just get it done, then come back and learn to fly at your leisure’ – I knew that was not the road for me. Flying had to be pleasure, and I don’t operate best under massive pressure. I opted instead to take the slow road and learn close to home at a steady and comfortable pace.

I had reckoned without the winds of change heading our way from the Far East and the altogether miserable weather during winter. I know any instructor will tell you that you should be able to seamlessly move from one aircraft to another, but even a car takes a while to get comfortable in, so why not an aeroplane? Especially when you aren’t used to carb heat, mixture or the joys of a wandering direction indicator and its gyroscope. Thanks to the dreadful winter weather we had been having, I didn’t feel much of a pilot anyway. Week after week my lessons got cancelled due to rain, low visibility or lashing storms. I did manage three sessions though, before lockdown put paid to everything.

The difference between GA and microlight flying is enormous, and that sense hasn’t gone away even though I am now more familiar with both. In a little ‘spam can’, your sense of being impervious to the outside world is stratospheric in comparison to feeling incredibly vulnerable in the wisp-thin structure of a microlight, where every gust makes itself felt. The GA aircraft feel so much more solid, and your overall visibility is so much less. It makes me realise we really do fly with our eyes on stalks in microlights.

The first time I got into the Cessna 152 was my first actual GA experience. I hadn’t flown for over a month, so it was hard to figure what was just feeling rusty, and what was a new aircraft. The lessons were spaced about a month apart, so I never got much momentum up, but I did enjoy the two sessions I had doing stalls in a corner of Southend’s airspace. I know it’s all the same blah blah blah, but the little extras like when you add carb heat certainly make the whole experience trickier. Or they did for me.

Lockdown meant taking a long look at the exam subjects, in the hope that I would be able to sit the tests even if flying instruction hadn’t fully restarted. The subjects I needed were Aircraft Technical and Principles of Flying. Engines are not really my thing, so there was a lot I had to simply learn by rote, in the hope that it was still there when I took the test. It was as lockdown dragged on that I realised if I didn’t do something drastic, I wouldn’t get signed off this side of winter, and I booked that three-day intensive.

I was lucky enough to have a P2 who was happy for me to fly in the left-hand seat, so my confidence in the Colt grew and I had control for longer and longer stretches as we flew. Skyrangers are very forgiving about things like speed and trim, and my former instructor, after blasting me for bad habits formed, insisted I could get up to speed in my regular steed, rather than the vastly more expensive outings in the Colt. He was partly right, and I realised how the formality of a GA airfield influences everything – from getting the radio calls exact, and the circuit height, to using trim more conscientiously.

We were actually pulling our Skyranger out for an engine health flight when the lifting of the lockdown ban on flying was announced, and since then I made every possible use of flying time. That included invaluable time in a friend’s new aircraft and getting comfortable with a different style of throttle, airspeed and flying on a compass heading, instead of just bumbling along.

All in all, I had prepped every exam question possible and had brought the Colt in for a greaser of a landing at home when we checked in to Bournemouth Airport for my three-day experience. I had been so worried I told no-one about my plans, in case they came to nothing and I couldn’t stand the pressure.

Without all that preparation I do believe it would have been the ordeal I dreaded. The instructor was a fellow South African, which instantly boded well for me, and he knew just how to get the most out of me – calmly confident of my abilities.

We headed over to the aircraft in a rain shower, which had cleared as I did my first walkaround of a PA28, a Warrior, getting to know the aircraft in even more detail than the Cessna. Three places to test the fuel, a long list to work through, learning to peer up the butt-end of the tail plane. My bête noire was the handbrake, which needed to be hauled up so decisively I got a cramp and a bruise each time and I struggled to reach down to change fuel tanks without being pulled back by the seatbelt.

We took off, heading across to the Isle of Wight. My P2 was a surprise passenger. As we got up to leave, the instructor had offered, ‘Do you want to backseat us?’, so I knew I had Skydemon recording the flight in my bag, and a pilot in the back who would be able to remember things when I went into overload.

I have never flown right around the Isle of Wight, despite landing there quite a few times, so it was fascinating seeing the other side. I tracked towards the Needles and then round the southern perimeter, in visibility where the horizon merged with the sea in washes of grey and pearly white. There were only a few stolen glimpses as I did my lookouts – sadly no time for any photos. We tracked over the sea the whole time, doing full and partial turns, climbing and descending, slow flying and fast. Then we climbed up high and I got to do stalls all over again, turning time and again to face Selsey Bill or back to Portsmouth. 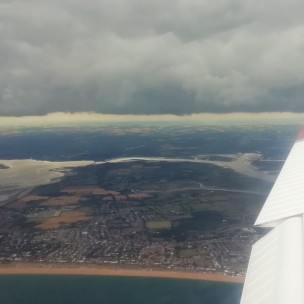 We were suspended in a gleaming patch of luminous skies, while to the side a huge cloud looked very threatening across the land. Dark and grey, it was backlit with shafts of vivid light hitting that watery coastline around Hayling Island. The Solent below was a shimmering flat calm blue. It was quite exquisite, and it took all my concentration not to reach for my camera but focus on how to catch the incipient stall without dropping any height at all. No one else was flying at all, except for one brave soul we espied way below us in the middle of a lookout turn. The skies were far too ominous for that.

I was pleased I didn’t have to do the first landing, because by now I was cross-eyed with concentration. I was also happy to know that the instructor could get us back to home base on his instrument rating if needed – it certainly looked like rain across Bournemouth way. We took off and did some circuits – some too high, too low or too fast. It was a lot to take in, but by the time the instructor suggested a tighter bad weather circuit to pick up our passenger – now waiting on the taxiway – I was getting it right. We headed straight for a black unstable mass of cloud. I thought of how dramatic it all looked and knew I would not be flying in this any time soon under my own steam but was happy to enjoy its beauty.

As we signed off from Sandown on the radio, they called that they were closing down for the day. And then the strangest thing happened. That raincloud shifted away the closer I got, until we called for a rejoin over a clear blue bay. By now I was managing the trim and the turns well, which made the next twenty minutes of waiting after “Standby – do not enter controlled airspace, not above 2000 feet,” much easier. Back and forth I flew in at an exact height, keeping the ball in the centre as we tracked figure eights across the bay, listening to an extremely busy circuit.

“Bournemouth is even busier than Heathrow,” the examiner told me later, “that’s why we now do the radio, or our students suffer overload. There is never silence, even for a minute.” Part of that is due to the mix of aircraft from GA to fast jets to international airliners. I was relieved when we got clearance to join the circuit. Having looked forward to making the most of the massively long runway and not land on the numbers for once, I got told to do just that, as we had a fast jet bearing down on us from behind and needed to expedite vacating the runway. 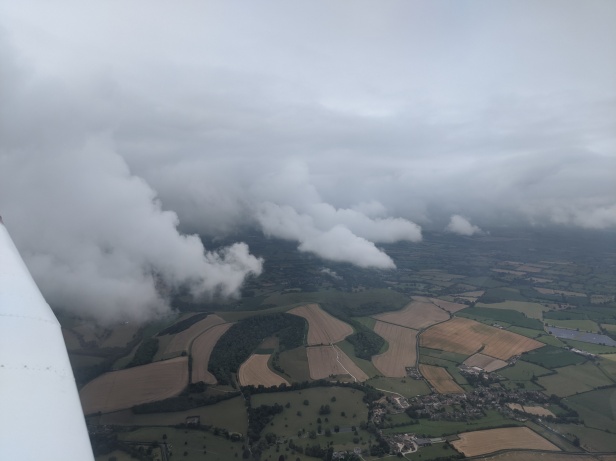 The next day my navigation exercise dissolved in cloud so dense the lesson turned into Instrument Appreciation instead. No hood was needed, I was concentrating desperately on the tiny window of the artificial horizon, trying to fly straight and level, and keep a balanced turn. The circuits we did at Henstridge later seemed impossibly tight, fit for a microlight, rather than a PA28. Everything I had been told about landings and giving myself ample space in the circuit seemed as vaporous as the cloud I had been flying in. There were villages to be avoided for noise abatement.

My prep for the exams stood me in good stead, and we whizzed through those. By the time I did my navigation exam and the GST I did feel like a proper pilot. I had broadened my flying experience in weather conditions that were challenging, to say the least. I had pushed my own boundaries way beyond their limits, and still felt in command of the situation. It was an exhilarating experience working with someone who felt he was there to enhance knowledge I already had, and it did my confidence the world of good.

There were no nasty surprises in the flying exam. Just two brief moments of respite when the examiner took control to peer down at an empty Glastonbury stage and at the furloughed cruise liners stuck out in Poole Bay (and I quickly grabbed a photo!). It is not something I would recommend to anyone who wasn’t up for the challenge, and fairly well prepped themselves, but when I finally get that piece of paper in the mail, I will know I am a better pilot for it.